Recently, we have been learning a lot about what makes animals endangered and how they are classified in terms of their conservation status. Assessing conservation status is not simply about the number of individuals remaining, but the overall increase or decrease in the population over time, breeding success rates, and known threats.

Below is the full list of classifications (source: Wikipedia). The official term “threatened” is actually a grouping of three categories: critically endangered, endangered and vulnerable.

There are quite a few vulnerable animals too at Adelaide Zoo, such as: African lion, Aldabra tortoise (more on this special one later!), Asian small-clawed otter, Binturong, Brazilian tapir, Giant panda, Giraffe, Hippopotamus, Hyacinth macaw, Mandrill, Quokka and Rhino iguana. 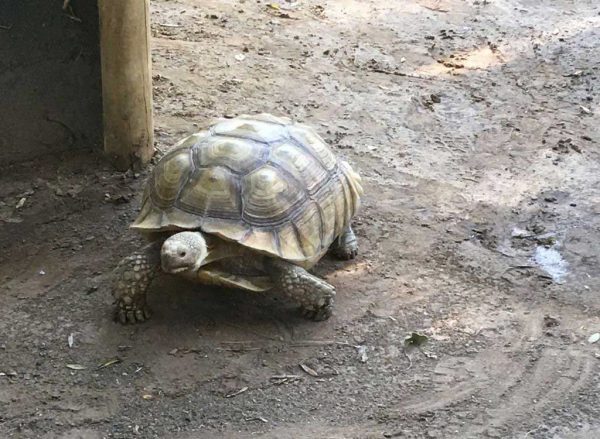 Recently this vulnerable species at Adelaide Zoo received some very special treatment by way of underfloor heating from Glow! The Aldabra Giant Tortoise is an ectotherm, which means they are cold blooded reptiles that don’t generate their own body heat and depend on their surroundings to regulate body temperature.

Named Aonika, Adelaide Zoo’s gentle giant hatched in September 1976 at Taronga Zoo, arriving at Adelaide Zoo in July 1987. She loves to eat fruit and veggies, especially broccoli, pears and sweet potato. In the wild, Aldabra Tortoises can be found in Seychelles, north of Madagascar. They can grow up to a metre long and have hard shells made up of 59 to 61 bones covered by plates (scutes). They can weigh between 160 to 250kgs! The Aldabra Tortoise is the last of 18 species of tortoise that once flourished on islands of the Indian Ocean. They are currently classified as vulnerable and are protected, however, they do suffer from poaching and loss of traditional habitat.

We feel very privileged to have been involved in such an important and fun project. Have you visited the Aldabra Tortoise enclosure at Adelaide Zoo? Imagine how lovely and warm Aonika will be this winter!